March 27, 2011
I’m attending MegaCon as part of my ongoing engagement with urban popular culture. The category “urban popular culture” is broad enough to be useless for an analytical perspective, but that ambiguity serves to allow the enterprising academic like myself cover to explore the transformation of U.S. culture in the contemporary context. To be sure, cultural studies grounded in the latest theoretical lens dissect events like MegaCon on a daily basis. Those analysis, framed as they are for academic audience provide depth to our understanding of how media manipulate desire and creates the distortions that problematic the relationship in our society.

As I have mentioned before, my interest in comics, specifically superhero comics, is grounded in my assertion that superheroes represent one demonstrative effect associated with urbanization in the United States. Having created the superhero genre, the superhero comic has evolved to represent the U.S. experience. More broadly, the modern comic medium has evolved to reflect the complexity of the U.S. experience in a way that many fail to observe. Comics are the space for cross-cultural bleed, a narrative fusion of cultural streams that allow different aspect of the American mind to flourish. Protected, in part by association with the fantastic, but bolstered by the unique cultural foundation, understanding comics can and should be understood as is a door to everything pop culture. 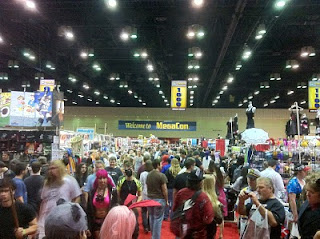 Indeed, the second day of MegaCon offered numerous examples of just this fact. MegaCon (short for Mega Convention) has it origins in the simplest of commercial goals—capitalize on the popularity of sub-genre entertainment of every kind. While the general public associates MegaCon (and other conventions) with comics and comic book culture, the reality of the MegaCon is that it provides space for many different aspect of popular entertainment culture. 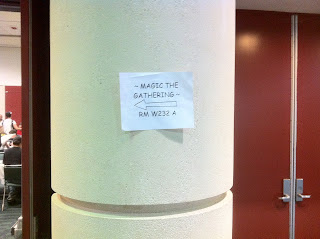 You don't need to look far for gaming 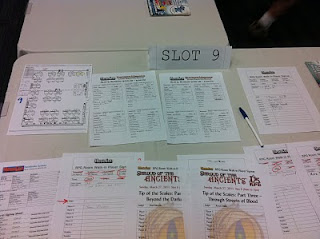 Get in the game! 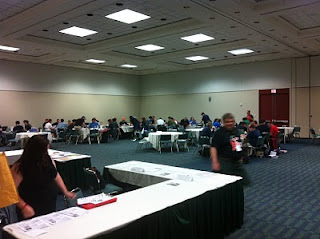 The intersection of comics, anime, cosplay, science fiction, and gaming make MegaCon (like other conventions) the perfecting setting for producer of pop culture entertainment looking for consumers. Comic books are, at some level, the established artifact at MegaCon. Today, comic fans are joined by science fiction, anime, toy, and gaming fans. With digital revolution making it easier for consumers to be exposed to every kind and type of entertainment, the MegaCon floor space shows different face in different space of pop culture fandom. 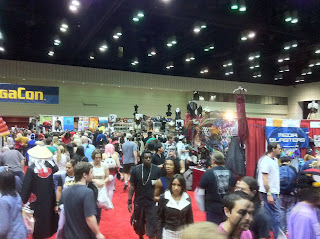 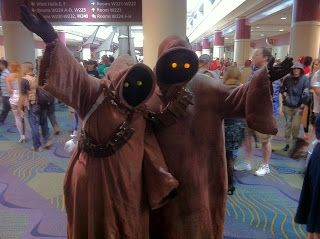 The second day of MegaCon, a Saturday, made the complexity of the fan created space clear even as the complexity of the selling to willing consumers in a media saturated society also became clear. The first day, especially early in day was slow, almost a quiet pace. With the youngest demographic trapped in school or saving their money, the crowd was smaller on the first day. The main floor was almost quiet by comparison to Saturday. The second day saw friends dressing up and hitting the con. Especially long lines were dedicated to Anime Sushi sponsored events and MegaCon as a platform for the intersection of pop culture was clear. 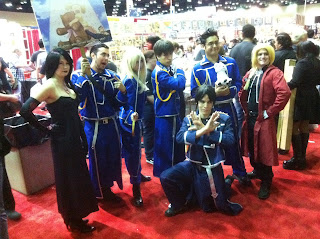 A girl actually screamed and started to cry when she saw these guys...she was excited, not scared.

The end of the day costume contest explained some of the excitement, the best costumes were out and about and every aspect of pop culture was on display. If you wanted time travel you got it: 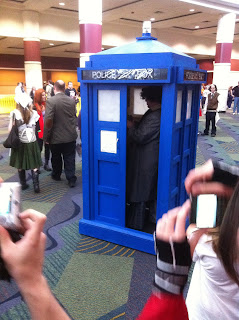 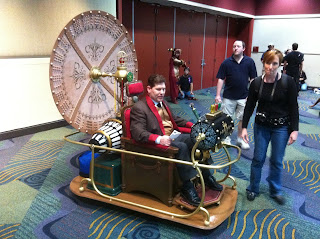 On the other hand, MegaCon is about comics to the general public and the excellent panels featuring creators from Marvel and DC attest to that fact. Dan Didio did a masterful job rallying the faithful at "Spotlight on DC Comic" panel. He dropped a nice spoiler about about Geoff Johns writing Aquaman and also made a nicely frame proclamation about DC holding the line at 2.99 for the fans. Given that DC has loss the total revenue race a couple of times over the last few months, his wording was pitch perfect. In essence, he argued that DC was trying to keep its comics at a lower cost and maintain quality for the fans. It was a subtle dig at Marvel and one that I suspect will find traction in the blogsphere. The message is more compelling at a subconcious level since Marvel has a big join SHIELD stand with fans dressed as character lining up to be photograph. 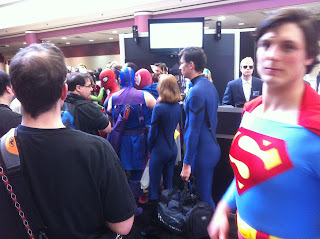 Ironically, Marvel's success in the movie business and it ownership by Disney brands it as a corporate entity easily in Orlando. I don't think the argument would resonate the same way in another part of the country. On the other hand, it could be people don't understand the context as I do.


For Marvel part, their representation at the "Spotlight on Marvel" did not have any writers, which diminished the excitement for some people. If the current state of comics has any element that stands out, it is the writers that are drawing readers back to classic characters. I'm sure having Geoff Johns at MegaCon made people go to the DC panel. In contrast, while many a young artist was at the Marvel panel, artist can talk about the artistic process, but can't talk about future plot details(at least they did not as far as I could see). Creating excitement about where the fictional universe will go is something writers and editors can do easily. The Marvel panel was noteworthy in that you got an idea of how artist break into the business has been affected by the internet. Yet, the old fashioned way of going to the convention and showing your portfolio still works.

At the same time, the fandom at MegaCon is strong and the power of the crowd is so strong that you can't ignore it. At the end of the day, that is something that defines the experience for everyone.