MegaCon 2011: Is the Orlando Experience Changing?

March 25, 2011
Orlando’s MegaCon is one of a host of pop culture gatherings that put the convergence of pop culture elements on display. While we all assume that conventions are about comics, the reality is much different. Comics represent the most visible aspect of MegaCon, but far the majority of its content.

I haven’t been to MegaCon in many year and since my last visit, comics have exploded in popular culture dominating movie screens and coming to represent the convergence of a pop culture narrative fed by corporate media conglomerates. Comics, anime, art, toys, gaming, television, and movies are all on display at MegaCon. 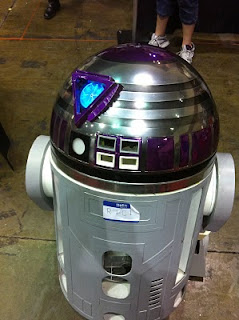 I ended up at this year MegaCon almost by accident. Well, not an accident, a technical problem. Like a lot of comic fans, I am conditioned to want to go San Diego ComicCon (SDCC). I, like a ton of people, did not get ticket for San Diego due to problems with the website. Now, there are a ton of conventions and not getting a ticket to SDCC made me stop and re-evaluate my own desire. There are other cons, why was I fixated on San Diego?

It was about the spectacle that has been created around San Diego. It has become ground zero for a pop culture entertainment marketing push. If you have anything, and I mean ANYTHING, you bring it to SDCC. Looking at last year's show (there is always plenty of coverage) I actually said to myself, some of that stuff doesn’t belong at SDCC. Of course, that reaction is rooted in a false understanding of these conventions. Over the last year, I have had the time to really investigate the development of comics and comic related culture in the United States. That investigation has made me realize that comics are at the heart of a cross narrative bleed. Comics are a space where the elements of high and low culture are fused together in ways that both promote the established product and give birth the new. 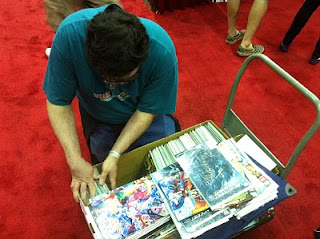 Yeah, he wanted Geoff Johns to sign these...as many as possible.


What does that have to do with Orlando MegaCon 2011? Well, unable to get into heaven I looked for other spaces to interact with comic culture on the ground. Of course, Orlando is a perfect place and I’m already here! In the past, I think people have not given Orlando MegaCon a lot of credit. In a way, every convention that is not San Diego seems to sit upon a sliding scale of awesomeness. In this construction Orlando has been described as.... nothing.

Honestly, plenty of people who know comics and related culture know about MegaCon, but the emergence of a broader cultural awareness is not there. This means I might ask any of my friends about San Diego and they 50% might say they know about the convention. On the other hand, if they live outside of Orlando (or even if they live in Orlando) the odds are they will not know that much about MegaCon if they are not comics fans. Being on the ground today, I think MegaCon is close to a tipping point in terms of promoting broader cultural awareness.

Everything about this year’s MegaCon reminded me of a show you might have heard about. At the same time, it still had moments of person-to-person old-fashioned convention fun. At some level, I don’t want it to get bigger, but the logic for why it will was on display. I walked around the floor and saw a display for Full Sail University, Ringling College of Art & Design and even a table for the Savannah School of Art and Design. Orlando may be known for Disney, but the reality is that there is an infrastructure (small as it may be) creating the kind of skilled artisan necessary to create digital entertainment in every form. As if to hammer the point home, I was handed a flyer for an independent animated movie right after I saw those booths. 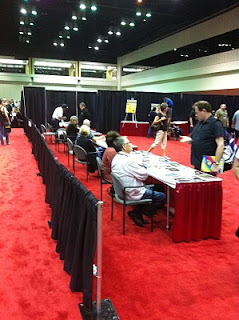 MegaCon had all the elements of pop culture entertainment synergy on the ground. You could register with SHIELD (promo for the new THOR) and a ton of creators where signing. Geoff Johns, Ethan Van Sciver, Darwyn Cooke, and more were on the floor with lines. Media guests from Battlestar Galatica classic--Herbert Jefferson and June Lockhart, Star Trek--William Shatner, Marina Sirtis (Next Generation), and Michael Dorn (DS9) were there. As were stars from Babylon 5, Smallville, and Buck Rogers, all with fans looking to get an autograph. There were a lot people and the show is just getting started.

Orlando should be space for a big convention devoted to popular culture and it is. Keep looking more to come..... 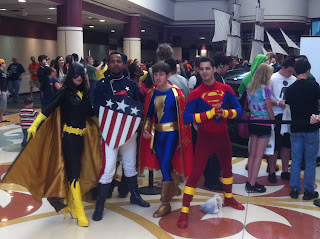