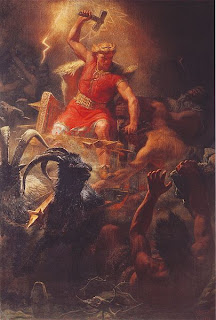 A while back I was reflecting on the intersection of comics and movies and I wrote....

There is also the concern that a coherent creative vision can be easily loss. At some level, Marvel should be mindful of this point. The ultimate marvel universe imprint basically allowed creators to take established characters and re-tell great stories. This has been extremely successful for the company. The current run of Ultimate Spider-Man by Brian Michael Bendis is classic stuff. The ultimate universe started with Bendis and Mark Millar, they built and controlled it. Jon Favreau provided a similar strong creative vision for the Marvel cinematic universe with Iron Man. I have faith that Kenneth Branagh's Thor will work. For everyone struggling with the concept.....Thor is Shakespeare with superpowers--done, I have explained everything for you.


The big weekend box office success in the United States, coming after a global roll out that as successful has proven me right about Thor.

Comic book movie have the potential to draw a big audience because the characters have a devoted fan base. That same fan base however is a hindrance. If you are making Superman, it needs to look and feel like Superman otherwise people don't want to see it. Thus, you need geeks and fanboys to know about the movie and want to see it. The problem is that you need those people, plus non-geeks and non-fanboys.

The film must be open enough to attract the marginally interested viewer who has heard through chatter from their friends that a new movie is coming out and it will be fun. The best comic to film adaptations are "true to the source material" but focus on making a great movie. This is why some the best comic book movies are based on characters people aren't really familiar with. In that scenario you get the best of both worlds. You have a small and dedicate geek community that will cheer you on (Iron Man fans) and a general audience that is an open book that you can introduce to the property. This is why, in my opinion, Iron Man is the most important Marvel movie of all time. Everything about the Marvel cinematic universe is built upon this movie. If you know Marvel, you realize the movies are a hodgepodge of story-lines from different Marvel imprints fused together into a semi coherent whole. From the standpoint of the long time comic reader (me), it kinda confusing, but for the general audience...it is what they know.

There is some questions about the future of comic movies in my mind. Thor answered one of those questions. How do you introduce the "cosmic" and fantastic Marvel elements in a cinematic universe built primarily on science (no matter how fantastic). Thor essentially answered this question and did so effectively enough that no one is complaining about the idea of Norse god walking around.

A second problem is one of escalating costs. The Avenger movie is perfect example of this problem. All these characters, all the stories related to them from different movies. All this must come together and...what? Are we going to get a trilogy of Avenger movies? What about Thor II, Iron Man 4? Are you going to recast Iron Man after 3? If so, what do you do with the Iron Man in Avenger II or III? These are still questions Marvel must answer, but they have in my estimation done a powerful thing by making a Thor movie that works for a global audience. They have expanded the cinematic universe in a way that they can capitalize upon for years to come.

Why Comics?: From Underground to Everywhere by Hillary Chute

Jodie Whittaker Talks Her Role As The Thirteenth Doctor In BBC's "Doctor...