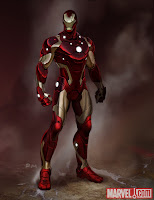 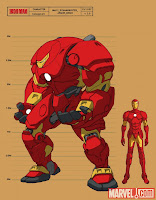 When munitions manufacturer and millionaire playboy Anthony “Tony” Stark goes to observe some of his military hardware in action in Vietnam, he is wounded by an enemy mine and taken prisoner. His communist captors threaten to kill him unless he creates weapons, but in a desperate bid to survive (shrapnel from the mine is slowly moving toward his heart) he works with a fellow captive, Professor Yinsen, to create a chest-plate to support his damaged heart and transistor-powered iron armor that amplifies his strength and destructive power. While Yinsen is killed, Stark escapes to return to the United States. Like most Marvel heroes, Stark’s power is as much a curse as blessing. As Iron Man, corporate spoke-man for Stark Industries, Stark battles Cold War inspired foes to protect his company and his country. Yet, his condition has not been cured; he must wear his armor chest-plate to stay alive. Iron Man was the most political of all Marvel comic characters. Iron Man was overtly pro-American, defense-oriented, and often associated with a conservative Cold War perspective. Stan Lee created Iron Man with the intention of taking combining classic Arthurian theme with modern science.

The stunning success of the first Iron Man and the success of Iron Man 2 (569 million global gross as of June 3rd) means that the classic Marvel story has managed to attract comic and non-comic fans alike. I have mention before the problems associated with comic adaptations for the big screen. As I consider my chapter on Iron Man for Ages of Heroes, Eras of Men, I know the success of the film adaption reflect pressure associated with contemporary fears about terrorism. Indeed, other Marvel characters (and DC) would not be so easy to re-imagine for a modern audience. Ironically, the fact that Iron Man does not have the popularity of Spider-Man or the X-Men means the filmmakers are free to meld elements from multiple characters and storylines together to make a movie that works.

Despite this, there is a tension between the movie and print. One question to consider--How is the success of the movie changed the comic book that spawned the movie? There is no question in my mind that the current storyline in Spider-Man in print is a reflection of the movie success. Unwilling to move too far away from the angst ridden teenager closely associated with origin story (and the first two movies), editors hatch "Brand New Day" to reset Spider-Man, ridding him of wife and the maturity achieved through allowing the character a marriage and steady job as a high school science teacher. The new status (no wife, back as free lancer) mirrors the movie Spider-Man. With the announcement of a teen-centric reboot of the franchise, the movie story will likely influence the comics more.

Marvel has made a decision to pursue a cinematic universe much like the print universe. This will feed viewers from one movie to the next (the teaser at the end of IM2---> THOR!) Yet, like Spider-Man, the Iron Man films have changed the elements of the Iron Man comic. Repulsor Technology was never a "power source" in the comics until now. Yet, the recent publication of Iron Man #25 saw Tony Stark promise Repulsor power will change the world. This change is one of several small changes to the comic that reflect the movie. The origin story has already been rebooted to focus on Afghanistan as the location Stark visited when he is injured and held captive to create Iron Man. The change makes Iron Man less a Cold War character and more a commentary on the military industrial complex in the age of global terror. These changes make it more likely that a movie fan who picks up the comic will understand what he or she is reading. From the perspective of a forty-seven year history tied to the Cold War... these changes don't necessarily work. Yet, these changes are only meaningful to "hardcore" comic fans at some level. For the broad media consumer, this synergy is a welcomed experience that allows them to continue to enjoy a product. For the academic tracking the changes (me!) It proves my overarching thesis that Iron Man is a way to understand how American understanding U.S. defense ideology.

Marvel has placed Iron Man at the forefront of a number of media properties. Nicktoons' Iron Man Armored Adventures has completed it first season. The kid centric cartoon take all the elements of Iron Man and recast Tony as 16 yrs old billionaire orphaned by a mysterious accident and searching for the Makluan Rings he believes are his father's legacy. Facing re-invented versions of character like Whiplash and working with teenage versions of Pepper Potts and James "Rhodey" Rhodes, it is a fun show that gets kids excited about Iron Man without getting trapped by establish backstory. Marvel's willingness to offer new and innovative content related to Iron Man will be key to it long term success. Yet, theses changes demonstrate how comics shape and in turn reflect evolving concerns in society.