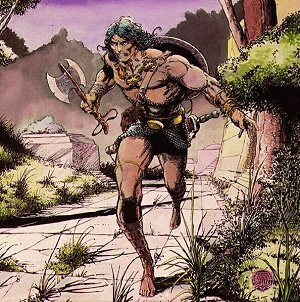 In a recent article, my colleague and I argued for consideration of the origins of the superhero in relation to the action adventure hero in pulp magazines. We discuss at length, the origins of the pulp magazine character type and of course examined Conan the Barbarian created by Robert E. Howard. Yet, I think there is much to be said about two other Howard characters: Kull and Solomon Kane. In both, I think Howard offered a complex narrative about race and identity. As a consequence, neither character reached the popularity attained by Conan. In Kull especially, the tension between established modern races and "primitives" is front and center.

For the Kull stories Howard created a ‘Pre-Cataclysmic age’ set before the dawn of recorded history. Atlantis and Lemuria had not yet vanished into the seas, but they are inhabited by savages not by advanced, utopian civilizations. In the Kull stories, the Thurian continent boasted grand civilizations and mysterious pre-human races. The first published Kull story, ‘The Shadow Kingdom,’ deals with one of these pre-human races. Centering on a conspiracy by a race of serpent men to kill the king and replace him with a duplicate to control the throne, the story features supernatural themes, paranoia, and action essential to Howard’s style. In the story, Kull is king of Valusia, the greatest kingdom in the world. While Kull's parentage is unknown to him, it is made clear he differs from his subject. Kull's rule of Valusia allows Howard to examine how a barbarian sees "civilization." Indeed, like his Conan stories, Howard see problems with civilization that grows too soft. One theme that runs throughout the Kull stories is that Valusia's surface greatness hides a hollow society. In one memorable passage of the “Shadow Kingdom” Kull muses about the royal court seeing faces that are “shadows and mockeries of substance.” The Kull stories offer a meta-narrative of society de-evolving and suggest the downfall of civilization under the relentless pressure of savage "others." This I believe represents a strong division between Kull and Conan. For all his savagery, Conan is understood to be going through a civilizing process, guided by strong innate, northern, white values. In Kull, the civilization has failed, and modernity is in decline. A message American readers of pulp magazine did not want in a world increasingly challenged by rising immigration and global uncertainty. Thus, while Kull was a character that garner some following, it was Conan that became a success and remain popular today.